For quite sometime now I have been asking the universe for a “sign” and clarity on my life’s purpose or more specifically what are my divine gifts?

The universe has been subtly trying to awaken my senses and WAKE ME UP to the gifts that I posses! But, I have been waiting for them to be delivered in a neatly wrapped “Tiffany Box!” You know the ones, the unmistakable blue box with the white ribbon neatly tied in a perfect bow on the top!

My soul journey began quite sometime ago; and along the way I would ask spirit to give me a sign? Just little things you know right? Like show me where my keys are when they’re lost; or give me a parking space right up front when it’s pouring down rain! Of course, my requests were always met without hesitation or question. But, I still was in doubt of the really big stuff!

Last April I went to California for my soul coaching certification and I began to realize a certainty that was never there before. I did however involve a big smack on the head to drive the point home. Sometimes you just need a swift kick in you know where so spirit was kind and decided just to cracked my head open (blood and all) to drive the point home as you will-lol

My next quest for validation was a weekend workshop with world renowned psychic medium John Holland in the beautiful Berkshires at sacred Kripalu Retreat Center. I was waiting for my blue Tiffany box to arrive via spirit of course. But again the messages were too subtle for my hard head to really consider this as validation of my special gifts and talents. I had two encounters with two different amazing women. Spirit had clearly led them directly in my path to help them with some healing words of wisdom! I knew this was a direct message from the divine but I still had the burning question of what’s next?

I am writing this blog as I fly home from a weekend retreat in Scottsdale Arizona. The weekend was called “Divine Wisdom” and I’m pretty sure the name was the same as the messages that I am bringing home with me!
Spending a weekend with Denise Linn, Doreen Virtue, Colette Baron-Reid, Lisa Williams and 350 like-minded people from around the world surely would offer some wisdom!

Saturday while buying a beautiful mandala picture that opened the 6th chakra I drew an oracle card that said CLARITY! Exactly my brain said clarity, clarity, clarity! Lisa Williams another amazing, gifted psychic medium was our speaker that afternoon, she did several amazing readings for the audience and I still was waiting for my sign! We did an exercise where we visualized a loved one and brought them close. I could feel my grandfather Robert right there in front of me in my own personal space. I felt his loving energy embrace my spirit and my eyes filled with tears! As I knew he really was there with me at that exact moment in time and it felt wonderful to have that connection. As we all came back to the present moment Lisa told us to think of a sign and right it down. Don’t over think it write down the first thing that comes to mind. So, I drew my symbol and it was a six-pointed star or a Star of David. It quickly came to me that my grandfather was Jewish although I believe he carried the pain of keeping his religion a secret most of his adult life! It also occurred to me that I had just gotten my first tattoo at the beginning of January and the center of my tattoo has a six-pointed star to symbolize the union of heaven and earth, masculine and feminine, all that is above and all that is below. It is the Hindu symbol for the heart chakra that is the energy center of our body. No coincidence as I now came to realize it was a remembrance and a strong symbol for my grandfather that is now imprinted directly on my heart chakra. None of this had occurred to me until this past weekend!

Lisa told us we would see our sign later that day or night to validate our experience. So, now my brain kicks in and says “a Star of David, you’ve got to be kidding me!” But, I remained faithful, as I knew my meeting was real! I kept looking for my validation but there we no six pointed stars to be found. Lots of 5 pointed stars, as there was a banner at the front if the room. But, no 6 pointed stars.
Saturday came and went and its now mid day Sunday and I am questioning myself ONCE AGAIN. On a break after Doreen I actually stomped my foot in the bathroom and commanded my grandfather to show me a sign that he was really there with me. I was kind of rough but I felt like I at least deserved the Tiffany box.

Our retreat ended and I had decided to purchase a book so I could ask Lisa Williams WHY did I not get my sign? When I approached her for a picture and an autograph I told her that I did not see my sign and I wanted to know why. She looked and me with those ever knowing eyes and said REALLY!?
“The signs are only for the people that don’t believe they can communicate with their loved ones.” She then said ” you don’t really need a sign do you? You knew your granddad was there.” She then shared some very personal things with me that I already knew but there again I wanted the nice package to validate my unresolved questions. I then let go of the notion that I needed to see my sign and was processing all that she had shared with me.

Later on that evening a few friends and I went out to dinner at a Latin restaurant in Old Scottsdale. After ordering our authentic tapas dinner the food runner started to arrive with our meal. One plate at a time! The fourth time he arrived at our table as he turned to leave I noticed a silver necklace.
And, I think oh my god he is wearing my sign! I can hardly contain myself until he comes back to the table to get another glimpse of his necklace. Of course when arrives the next time he not only had our dinner entrees he had a message for me in the form of a Star of David right there on his neck! I asked him his name and he said “Mario” and I thanked him and told him he was a messenger of god for me and that he had made my night!

The truth of matter is he had no idea how long I have been waiting for him and the impact of receiving this long awaited message! Maybe he was an angel in disguise!

So, now that I’ve received my “Tiffany Box” I feel my lesson is to trust in myself more and follow my divine guidance
And that I don’t need the validation of someone else to tell me what I knew all along inside my heart….

I will close with one of my favorite quotes from The Wizard of Oz: 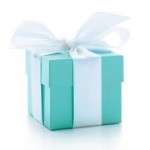